Struggle is the price an Artist Pays: In This Record Label Charade

I've been wanting to write a blog  giving an in depth look into Hanson's struggle with their old label, while also reflecting on record labels in general. It seemed  most appropriate now, especially with  Kesha's recent courtroom drama.  The idea for this blog came about when was  I looking through my CD collection, for CDs to sell and on the top of the pile was"Greetings From the Imrie House" by The Click 5.  Five pretty-boy college  guys in matching suits  who played their own instruments, and whose catchy single "Just  the Girl" dominated MTV and the music charts in 2004/2005. What happened to the Click 5, whose perfect hair captured my 16 year old heart , more than their music ever did?
After a quick Google search, I  found a  sad story of a band who rose too fast and fell  even faster and their label who I'm sure at one point claimed they were a great talent, asset, and whatever else they say to musicians to get them to sign a contract, did nothing to help matters.  In 2007, their lead-singer and founder of the band quit, obviously unsatisfied with the label but instead of trying to appease him, they replaced him, which is just a slap in the face to the fandom, who were not impressed with the "makeover" and therefore the  2nd album bombed. Their Wikipedia page was highlighted with trigger quotes: A producer declaring "He was not a Dictator." and" The band felt that label would not let them make REAL music."
Hanson VS. Island Def-Jam
This of course reminded me of Hanson and their struggles/ war with their newly acquired label Island Def-Jam in 2002. Long story short, their old label was absorbed in what the was the largest music merger in history. Hundreds of artists were immediately dropped and it is my firm belief had Hanson's second record not just been released, they too would have also been on that list. Which in the long run, might have been easier than ending up on a rap label with Britney Spears and the Backstreet Boys.
Hanson did everything to appease their new label, they worked with every singer, songwriter, and producer their label suggested and submitted over 80 different songs and still got rejected to record. . Jeff Fenster (A &R) went as far to say that he felt they had many good/ great Hanson songs but would not give the green light to record.  I mean what more could  they ask for, except for Hanson to sound like Hanson?  Instead they felt Hanson needed to be tortured for almost three years.  The main problem was IDJ and Jeff Fenster didn't know Hanson's sound, except what most of the world knew which is Mmmbop.
A record company gets so caught up in the gimmick of selling the artist, whether it's matching suits, or three young boys with long blonde hair, the reason they signed them         ( talent) becomes an afterthought.  This is where I feel  most record companies fail their artists, they gets so lost in the logistics and money (which it is a lot), that they refuse to put ounce of faith, that someone like Hanson, who has sold over 15 million albums might know something about their music. As Taylor Hanson said "They get made the bad guys, just because they wanted a say in their music."
Labels view most musical groups as only a five year investment. I read this fact in an article talking about how record companies were amazed One Direction was still going strong. Five years doesn't allow a lot of time for putting trust in an artist, but it seems to be enough time to view them as objects, something to be  controlled. I mean Nick Carter had to fight his record company (IDJ) to get married on the day he wanted! Elton John had to take his newest album to another label after his original label rejected it!
Hanson realizes they are brand and knows their market is mainly their fans! Regardless of the amount of cash a label throws down towards an artist, it is the fans that  will always make the biggest investment and I wish companies would stop viewing us as disposable. Kesha is still fighting to make her music, to keep her fans. It seems record companies act as if they have all the time in the world but everyday fans are lost and one less fan equal one less concert ticket sold.
Record company  focus so much on the numbers  and the selling  of an artist/music it seems they often forget who they are selling it to: THE FANS!  This is one of things Hanson does best! Their music comes first and then their fans and they always make their music  with their fans in mind! This is why I am so happy to be part of this fandom. Hanson knew they needed to break away from IDJ if they wanted to keep their fans and the career they have.  I have never met a band that does more for their fans, correct me, if I am wrong. They do concerts, meet and greets, live streams,  a three day free event for fan clubs members aka Hanson day, they include fans in their music videos, and even in their island vacations, because of this Hanson has reaped the greatest rewards.  In 2004 , Hanson had number one independent album (Underneath), and a popular  single that IDJ wouldn't ever let them record!
Today Hanson is still going  strong with 4 more albums under the belt  and just this month they made the cover of Entrepreneur Magazine which is greater and has more meaning than any Teen Beat. 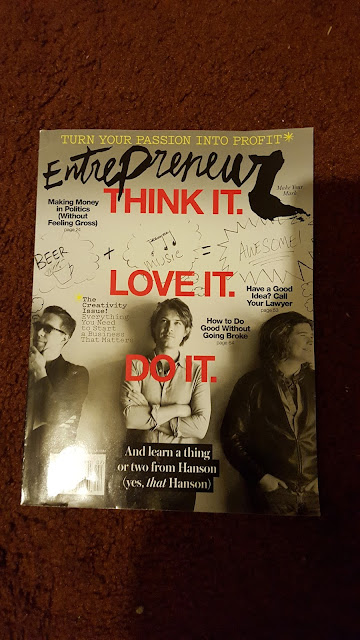