I want to mention a couple of things before I start this blog. This concert not only puts 35 Hanson shows under my belt, but the third week of October marks 12 years as a Hanson fan.
·         This concert was my first birthday show (Happy 30th Zac) and the farthest I had ever traveled to see Hanson.
·                    I got to the venue about 2pm and was surprised at how short the line was and that the line didn't start until 9:30pm the day before. But as I was talking to fans in line, it seemed like they were fans that hadn't seen Hanson in like 10 years. So it wasn't the normal die-hard fans I was use to.
The Show 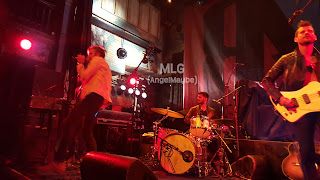 Opener: Paul McDonald.  I love Paul McDonald. I remember back when I first heard him on the Anthem Tour, I was unsure about him and by the end of a few shows, I was in love. I have seen Paul a few times outside of Hanson and once in a friend's living room. He's  always entertaining and engaging  and his  lyrics are moving and deep, especially after his breakup from Nikki.  Hanson and Carrick joined Paul on staged for the last song "Renegade". 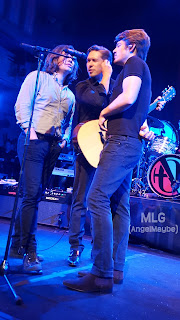 Night 1 was a 27 song setlist, (Setlist ) that began and ended with Happy Birthday. Hanson started the show off acapella singing "Teach Your Children" . Beautiful.
Other (Hanson) Highlights Included:
Besides the usual mix of 50's and 60's rock and roll with Billy Joel thrown in the mix , there are always a few songs at every show that surprise me.
Shake a Tail Feather: I hadn't heard this live before and it was great to see how it had changed from the 98 version from the Live from Albertane cd. 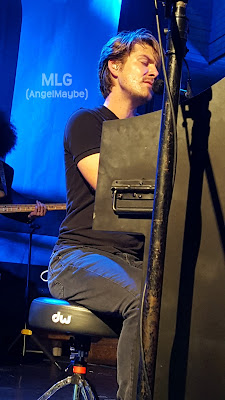 Chain of Fools: I love Aretha Franklin. Zac's vocal range is off the charts and downright spine tingling. The bass beat lone was enough to keep me rocking all night!
Delta Lady: Tay's solo. The surprise of the night. This was the one song I didn't really know and after hearing this and "Song for You" on the stream from Chicago, I really need to check out Leon  Russell's  catalog.

In A little While/Desire: U2 & Hanson. Enough said. Taylor knows how to use a tambourine.

The show ended with bang, Zac belting out " I Believe in a Thing Called Love" and climbing over the barrier,to touch fans. 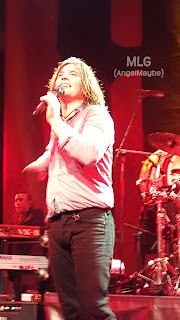 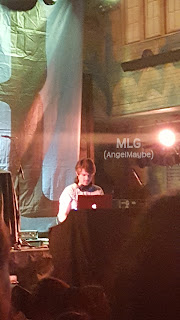 I don't know where Taylor gets all his energy. If was me, I'd push play and walk off stage. But not Taylor Hanson, no he dances, jumps, and tries to be engaging. These after parties are weird, but in the best way possible. I don't understand the fans that cram themselves up against the barrier to just stare at Taylor. But to each their own. I use the time to dance, drink, and act foolish with friends I've met through this band. Moments like these won't last forever, so take it all in.
The party picked up when Paul joined Taylor on stage for Twist and Shout. Taylor at one point pointed to his shoulders and Paul gave Taylor a little shoulder rub.

I hope this wasn't too long winded. Up next: Hanson in Nola part two & Hanson in Los Angeles tomorrow.
Posted by Michelle G at 8:37 PM No comments:

Introduction: What's in a Name?

When the idea of starting a Hanson Blog came to me, I really thought the hardest thing would be coming up with topics to post and write about.  Little did I know that coming up with a Title and URL  would be equally as hard, if not harder.     I literally spent days writing down names, crossing them out, and looking through what must of been Hanson's whole catalog of music. I had several pages of notes and a couple of ideas that made me sounds like a total drug addict. The only thing I knew was the Title/URL had to be Hanson Lyrics. Why? Well, because...
1)   This is a Hanson Blog, Duh.
2)  When it comes to music, lyrics always hold the most weight to me. What a song says or the meaning behind the lyrics, is what makes me love a song or hate it.
3) At the end of the day or god forbid the end of the (Hanson) era, when we are done declaring which Hanson is the best/favorite,or who was first in line for the show, at the curtain's close, only the music will remain.
Blog Title: One More (Hanson) Trip to the Other Side
This line is taken from one of my favorite Hanson's songs " Got a Hold on Me", not only do I feel that in some ways Hanson does have a hold on fans, but I like the play on words that this line presents. A "Hanson Trip" as in literal travel to see the band, or a "Hanson Trip" as in  the "Hanson High" that  fans seem to catch pre, during, or post concert.
The Url: Come Home to This Town
Taken from the song "Already Home".  I love this line because when you are traveling for Hanson, whether it's one show or the whole tour family and friends often wonder where you are and when you are coming home, no matter how many times you tell them. When you on the road the destination and Hanson seem to become your home.
Then there are always the fans that are asking/ begging for Hanson to come to  their town. Foreign fans or local it doesn't matter, one time is not enough.
And when one finally comes home to their town, the journey, the concert(s) and the memories will always be there, for you to come back to, and maybe it's just me, but once you've had a Hanson adventure, the town in which you left/ live is not quite the same.
Sorry, for the long intro, but I felt it was important. One last thing before I go. I am heading to New Orleans to visit my Mom and see Hanson, part of the Roots and Rock N' Roll Tour. This is my first Birthday show ( Happy 30th to Zac!), I am very excited!  I will be sure to report back!
Michelle G


Ps. Sorry for any grammatical errors, spelling etc. It's late and I have some ZZZs and a flight to soon catch. If they are there, ignore and I will fix at a later date.
Posted by Michelle G at 2:40 AM No comments: